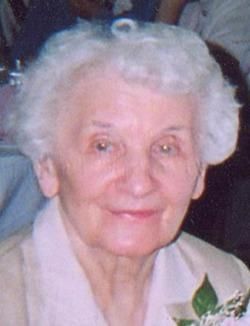 WESTFORD - Anita (Kovalchec) Holmes, 97, of Westford passed away peacefully on Saturday, March 28th, 2015 surrounded by her loving family. She was the beloved wife of the late William Holmes who passed away in 2001, after 65 years of marriage.

She was born in North Chelmsford on August 9th, 1917, the daughter of the late Stephen and Domanica (Butko) Kovalchec. She lived most of her life in Westford and graduated from Westford Academy in 1934. Anita was the last survivor of the class of 1934.

Prior to her retirement, Mrs. Holmes was employed by Abbot Worsted Co. of Westford, Acton Labs, Inc. of Acton and retired from Digital Equipment Corporation. She was a communicant of St. Catherine of Alexandria Parish and a member of the Cameron Senior Center.

Relatives and friends may call at the J. A. HEALY SONS FUNERAL HOME, 57 N. Main St., WESTFORD, on Wednesday, April 1 from 4 until 7pm. Funeral Thursday morning with a Funeral Liturgy and Blessing at 11:30am at St. Catherine of Alexandria Church, 107 N. Main St., Westford. Interment in St. Catherine Cemetery. Those who wish may make memorial contributions to the Friends of Cameron Senior Center, P.O. Box 2223, Westford, MA 01886. To share your thoughts and memories of Anita, please click the sign guestbook link.