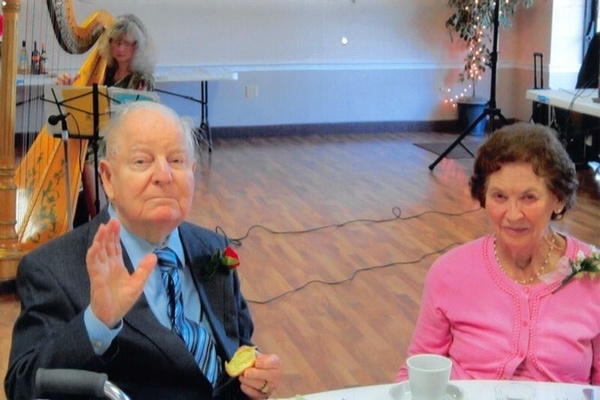 Betty Reed MacCartney, age 100, passed away peacefully on Wednesday, September 8, 2021 at Robbins Brook Senior Living in Acton Massachusetts. She was the beloved wife of the late Gaylord MacCartney, until his passing in 2017.

Betty was born in Philadelphia, Pennsylvania on June 1, 1921, and was a daughter of the late Edna (Rennick) and Alfred Taggart Reed. Unfortunately, Betty did not know her real Mother because Edna passed away about two years later. Her Dad remarried to Jean Probasco who became her stepmother that helped raise Betty. She attended Haddonfield Memorial High School and graduated in 1939.

In her early 20's Betty had an interest in fashion which led to a short career in modeling. Her love for fashion stayed with her throughout her whole life. In 1948, she married the love of her life, the handsome cadet from West Point named Gaylord (Gayle) MacCartney. Gayle joined the Air Force after graduating from West Point. His extensive military career led them to move many places throughout the United States as they raised their children.

One of Betty's favorite past times throughout her life was gardening. She was especially active in the Garden Club when they lived in Annapolis, Maryland where she won many awards for her flowers. In addition, she also volunteered her time as a Gray Lady at the Naval Academy Hospital. Another one of Betty's favorite hobbies was playing the piano where she often played songs that were popular in the 40's.

Betty enjoyed a 68-year marriage to Gayle, where they lived 45 years in Westford, Massachusetts from 1972 to 2017. For several years they had the added responsibility of caring for their parents in their home. From 1971 to 1978 Betty also played a key role in providing parental care to her in-laws. Shortly after the passing of her mother-in-law, Elizabeth MacCartney, in 1978, Betty's stepmother passed away in Daytona, FL in 1979. Betty then moved her Dad to her Westford home and continued to provide parental care to him until his passing in 1985.

While living in Westford, Betty continued her love of gardening by beautifying their property with many varieties of colorful flowers. She also raised many house cats and faithfully fed several of the local wild animals that would visit their property such as: a wide variety of birds, wild turkeys, deer, raccoons, squirrels, and chipmunks. Betty was an excellent Bridge player. She was one of the original members of a Ladies' Bridge Club that originated in the Patriot Lane circle where they lived in Westford. Over time the club membership changed but they met regularly to play bridge from the mid-1970's to the early 2000's.

One of the passions that Betty and Gayle shared together was attending their High School Reunions and Gayle's Class of 1948 West Point Reunions. They were very instrumental in organizing many of them.

Betty is survived and will be deeply missed by her daughter; Lisa J. MacCartney-MacDonald and her husband Thomas J. of Old Lyme, CT; her son, Bruce R. MacCartney and his wife Sandra A. of Rancho Santa Margarita, CA; her two grandchildren, Joshua and Katelyn MacCartney as well as many nieces and nephews.

Relatives and friends are invited to Betty's Celebration of Life on Wednesday, September 15th from 4 until 6 PM at the WESTFORD HEALY FUNERAL HOME, 57 N Main Street, Westford. Her funeral service will take place following at 6 PM in the funeral home. Betty and Gayle will be laid to rest together at West Point's Columbarium at a later date. In lieu of flowers, donations may be made in Betty's memory to the American Red Cross, 101 Station Landing Suite 510, Medford, MA 02155 or the J.V. Fletcher Library, 50 Main Street, Westford, MA 01886.