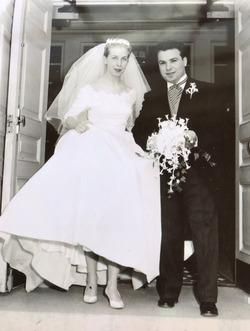 Catherine "Cathie" C. (D’Entremont) Greco, 77, of Westford MA passed away on April 11, 2018 with her daughter by her side. She was the widow of James "Jim" Greco.
Born in Medford and raised in Lexington, she graduated with the class of 1959from Lexington High School.
Cathie was preceded in death by her husband James "Jim" Greco (Arlington) in 1996. They moved to Westford in 1965, raising their two children James (Jimmy) M. Greco (Groton) and Caroline Greco (Westford).
Cathie worked with the Westford Schools as Dietary Manager for over 35 yrs. A favorite of many Westford Academy’s students and faculty throughout her years. She enjoyed being a mother and homemaker, as well as Jazz music, choir singing and a love of animals.
Cathie leaves behind her daughter Caroline and son James, his wife Rebecca and their daughters Casondra, Rachelle and Siera. Cathie is also survived by 3 sisters Marcia Perron,Jane Melcher and Susan McInnis, five nieces and nephews and many cousins.