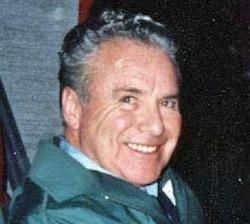 NASHUA, NH - Clement Grover Hightower, age 93,of Nashua, formerly of Naples FL and Lowell,passed away on Wednesday, June 14, 2017 in Merrimack, NH after a brief illness. He was the beloved husband of Claire L. (Lucas) (Teresko) Hightower.

He was born in Capitan, NM on Sept. 28, 1923, son of the late Perry and Julia (Artiaga) Hightower. For 12 years, Grover served in the U.S. Navy during WWII and the Korean War, having served aboard the U.S.S. Concord. In 1946, he participated in the Atomic Bomb test on the Pacific Island of Bikini.

Grover met his first wife, Marie Cecile Robinson in Boston in 1945 and predeceased him in 1956. He worked for 32 years for Raytheon Co. in Lowell as a foreman and a senior industrial engineer where he designed and received U.S. patents for several electro magnetic devices.

ARRANGEMENTS - Family and friends may gather to honor and remember Grover at the J. A. HEALY SONS FUNERAL HOME, 57 N. Main St., WESTFORD, on Monday, June 19 from 4 to 7pm. His Funeral Mass will be celebrated on Tuesday morning at 9 o'clock at St. Catherine of Alexandria Church, 107 N. Main St., Westford. Interment will be private. To share your thoughts and memories of Grover, please click the sign guestbook link.