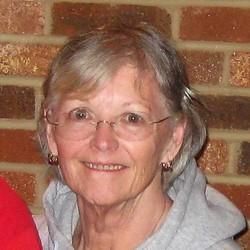 WESTFORD – Colleen M. (McNamara) Chase, age 71, a longtime resident of Westford, passed away unexpectedly on Friday, June 29, 2018 at her home. For 40 years, she was the beloved wife of John T. Chase. Cause of death was a heart attack as result of complications due to surgery, and a four-year battle with breast cancer.

After graduation, she worked for Spectrum Dynamics and was transferred to the Boston Area. She also worked for Data Terminal Systems and Kronos, becoming a manager for documentation and testing. She always had a gaggle of wind-up toys on her desk, a sparkling smile, and likely a better way of doing whatever needed to be done.
Colleen met Jack in 1977 and, after some persistence on his part, she fell in love with him, his son Adam, and his whole family. She made a welcoming home for them in Westford, where she and Jack raised three more children, Katherine, Bridget, and Alex. In addition to working, she poured her energies into raising her kids – cooking, driving to endless lessons, practices, and play-dates, having parties, planning vacations, and editing every paper ever written.
Colleen also loved her friends fiercely. She spent hours on the phone, visiting, and sending cards and emails. She was dedicated, loyal, and unfailingly supportive. She could spin any story and found the humor in almost everything.
Since retiring, Colleen volunteered at the VA in Manchester, NH greeting and helping patients – it gave her so much joy. As a child of a military family, she was passionate about giving back to veterans. She was equally convicted in her political views, because she felt a true pride for the ideals and values of her country.
She is predeceased by her brothers Rory and Kerry McNamara, and her in-laws Marion and Phil Chase. She is survived by her husband Jack, their 3 children Katherine, Bridget and Alex, her step-son Adam, her brother Kevin McNamara, her niece Shannon McNamara, and her nephews Sean McNamara and Rory McNamara Jr.

ARRANGEMENTS – A Memorial will be held at the J.A. Healy Sons Funeral Home, 57 N. Main Street, Westford from 1PM to 3PM, Saturday, July 7th. A reception with be held at the family home following services. A private burial will be held at a later date at the First Burial Ground, Henniker NH. In lieu of flowers, those planning an expression of sympathy are asked to please consider a memorial donation in Colleen’s name to The Intrepid Fallen Heroes Fund athttps://www.fallenheroesfund.org/
To share your thoughts and memories of Colleen, please click the sign guestbook link.