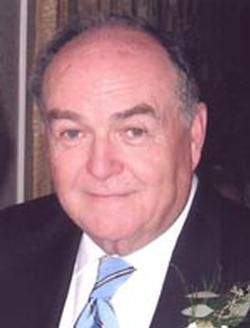 WESTFORD -- Daniel S. Hanley, 75, of Westford died Monday, August 12, 2013 at his home surrounded by his loving family after a long and courageous battle with Diabetes. He was the husband of Mary Louise (Mullaney) Hanley, with whom he celebrated his 45th wedding anniversary on June 8th.

Born in Lowell On Dec. 28, 1937, a third generation Westfordian, he was the son of the late Edward (1955) and Marion (Sheridan) Hanley. He was the step-son of the late Arthur L. Healy, also of Westford. And, the brother of the late Edward S. Hanley of Lowell. His father, Edward T. Hanley, was born in Forge Village, the son of the late Daniel & Catherine (Mahoney) Hanley. His mother, Marion was born in Lowell, the daughter of the late Mary A. (Burke) Sheridan and Thomas F. Sheridan of Billerica. Daniel attended Lawrence Academy in Groton, Ma., graduating in 1955. He continued his education at Boston College, where he studied Economics, graduating in 1959. From 1959 to 1966, he served as President and Treasurer of Hanley Yarn Company in Forge Village, following his father's retirement. In 1967, he joined Mosley, Hallgarten, Esterbrook & Weeden in Boston as a stock-broker. In 1987 he moved to A.G. Edwards & Sons where he was appointed Vice President and given his own Branch office to run for the firm, in Lowell. After growing the Branch he subsequently moved it to Chelmsford where it went on to become one of the more successful offices for A.G. Edwards. He retired from Wells Fargo Advisors where he was also Branch Manager & Vice President in 2011. A lifelong Westford resident, Dan served on the Westford School Committee, the Finance Board and on the initial Board of the Roudenbush Center, which became the first Community Center in town. Dan's father was one of the Founding members of Saint Catherine's Parish in Westford. Dan, along with his wife, Mary, were also very involved in the Parish, where Dan served as a Eucharistic Minister and Mary taught for the Parish's Sunday School Program. From 2002 to 2010 Dan was a member of the Board of Directors for D'Youville Nursing Home in Lowell, where he helped to implement a new Rehabilitation Facility and Foundation. Dan enjoyed golf, traveled extensively with his wife but most of all was happiest spending time with his family. His favorite spot to do so was Fortune's Rocks in Biddeford, Maine, where his children and grand-children have and will continue this tradition. In addition to his wife, he is survived by a son and three daughters; Elizabeth Anne and her husband, Keith Beloli of Taunton, Scott Sheridan and his wife, Heather Hanley of Ayer, Susan Jennings and her husband, Eric Leip of Devins and Mary Catherine (Kate) and her husband, Matthew Smith of Westford. He is also survived by six grandchildren that adored him; Tyler, Meaghan & Mairead Hanley, Ryan Leip, Ashlyn Smith & Chace Beloli.

Visting hours will be held on Thursday, Aug. 15th from 2pm to 6pm at Saint Catherine of Alexandria Parish, 107 N. Main St., Westford. His Funeral Mass will be celebrated on Friday morning, Aug. 16th at 10 o'clock at Saint Catherine of Alexandria Parish. Interment in St. Catherine Cemetery.In lieu of flowers, contributions may be made in Dan's memory to the American Diabetes Association, 330 Congress Street, Ste. 501, Boston, Ma. 02210-1258