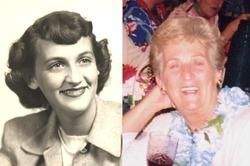 WESTFORD - Dorothy Mary (Charette) Antonelli, 84, of Westford, passed away in the early hours of Tuesday morning, February 21, 2017. She was the beloved wife of the late John Thomas Antonelli, Jr. to whom she married on December 1, 1951. This past December, John and Dotty would have celebrated their 66th wedding anniversary.

Dorothy worked for the Westford Public Schools in the cafeteria while her children were in elementary school. In her mid-forties, she pursued her real estate license and worked for Realty World for a number of years until taking a job with Bank of New England. Dorothy was a vibrant, beautiful, and smart woman who worked her way to become a mortgage loan officer at the bank. She finished her career back in Westford, working in the Westford Town Hall, retiring in the early nineties.

Dorothy was a tremendous cook and baker, She also loved to garden and spend time outdoors. She treasured every moment spent with her grandchildren and family. Her family will miss her beautiful smile, contagious laugh, and warm touch.

Unfortunately, Dorothy was diagnosed with Alzheimer’s in 2000 and fought a long, courageous battle against a formidable foe. She worked so hard to fight the disease and to enjoy her time left with her children and grandchildren. She was the best mom a son or daughter could ask for in life. More so, an even better grandmother to her eight grandchildren, Andrew, Marc, Nicole, Mackenzie, Brandon, James, Olivia, and Nicholas. She also leaves a sister, Lorraine Gilbert of Florida along with many nieces and nephews. She was a sister of the late Anita McCarthy, Beatrice McCarthy and William and Francis Charette.

ARRANGEMENTS – At her request, there will be no calling hours. Family and friends are respectfully invited to attend her Funeral Mass to be celebrated on Thursday morning, Feb. 23, at 10 o’clock at St. Catherine of Alexandria Church, 107 N. Main St., Westford. Interment will be private. The family asks in lieu of flowers, please consider a donation to The Alzheimer’s Association, P.O. Box 96011, Washington, DC 20090-6011 or online at alz.org/donate. Arrangements are in the care of the J.A. HEALY SONS FUNERAL HOME, 57 N. Main St., Westford. To share your thoughts and memories of Dorothy, please click the sign guestbook link.