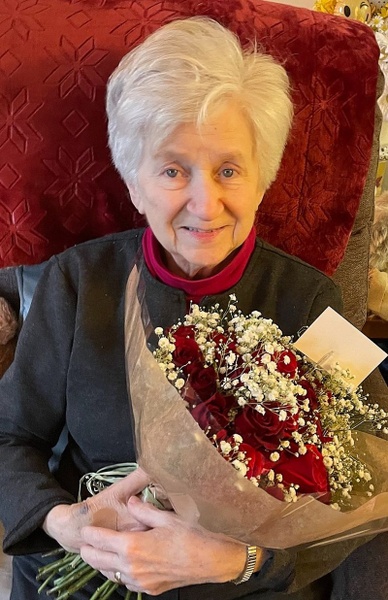 WESTFORD - Elizabeth "Liz" (Feldes) Mayer, 79, a resident of Westford since 1972, passed away on Monday, January 31, 2022, with her loving family by her side. She was the beloved wife of Adalbert "Bert" Mayer, with whom she shared 57 years of marriage.
Born in Croatia on May 16, 1942, she was a daughter of the late Joseph and Anna (Tremmel) Feldes. Liz immigrated to the US at the age of 10 and settled with her family in New York, around the corner from her future love of her life, Bert. They later discovered that they travelled to America on the same ship, and their love has been one for the ages. In addition to her husband Bert, Liz is survived by two children and their spouses; Christine and Geoffrey Vercauteren of No. Chelmsford, and Michael and Sharon Mayer of Groton; her siblings, John Pertschy and Eva (Pertschy) Bauer, both of GA; four grandchildren, Katie Mayer, Rachel Mayer, Carter Vercauteren and Michael Mayer, Jr.; and also several beloved nieces and nephews. Liz was the loving mother of the late Kathleen Ann Mayer who passed in 1981.
Prior to her retirement, Liz was employed as the Director of the pre-school at the Roudenbush Children's Center for approximately 10 years. She started at Roudenbush as an assistant teacher, and then worked her way up to running the school as its director and opened an additional preschool in Nabnasset. In honor of this accomplishment, the Nab playground was dedicated in her name in 2016.
Liz had a way with everyone – especially children – that blessed many of her students, families, and anyone who was lucky enough to meet her. She was a kind, nurturing soul. Even in her later years as she was challenged with Alzheimer's, Liz's caring spirit still found it's way out. She sought to help her fellow Bridges residents by tying a shoelace, buttoning a sweater, complimenting an outfit, or sharing a warm smile.
Liz enjoyed travelling, the outdoors (especially the ocean), and dancing with Bert at the German Club. She was a communicant of St. Catherine of Alexandria Church, a member of the Westford Garden Club, and a volunteer and member at the Cameron Senior Center.
Liz especially enjoyed her time spent with her children and grandchildren, and was the most wonderful Oma. She was an artist who painted beautiful watercolor landscapes and was an avid gardener.
Ruhe in Frieden, liebe Mama. Wir werden dich immer im Herzen tragen.
(Translation: Rest in peace, dear Mom. We will always carry you in our hearts.)
Relatives and friends are respectfully invited to Liz's visitation on Sunday, Feb. 6, from 2 PM until 6 PM at the Westford Healy Funeral Home, 57 North Main St., Westford. Her funeral mass will be celebrated on Monday morning, Feb. 7, at 10 AM in St. Catherine of Alexandria Church, Westford. Face coverings are required at the funeral home and church. Burial will be private.
In lieu of flowers, donations in her name may be made to The Alzheimer's Association.