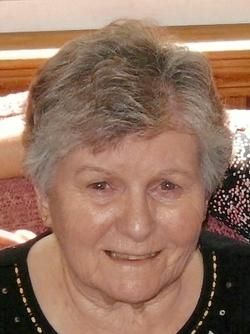 Elizabeth E. "Betty" (Holmes) Stander, age 84, of Chelmsford, formerly of Westford and Bedford, died Sunday June 29, 2014, at Sunny Acres in Chelmsford. She was the widow of James R. Stander who died in 1999.

Betty was the past president of the Bedford Social Club, and Queen Mother of the Crimson Cat Red Hats Club.

ARRANGEMENTS: Relatives & Friends will be received on Tues. July 1, 2014 at the J.A. HEALY SONS FUNERAL HOME, 57 North Main St., Westford, MA from 4:00-8:00 PM. Funeral Wednesday morning with a prayer service to take place in the funeral home at 10:00 AM. Interment to follow at Shawsheen Cemetery in Bedford, MA. IN LIEU OF FLOWERS, contributions in her memory may be made to the Genevieve M. Stander Scholarship Fund, Payable to "CSF of Bedford" PO Box 585, Bedford, MA 01730. Please visit online memorial at www.HealyFuneralHome.com