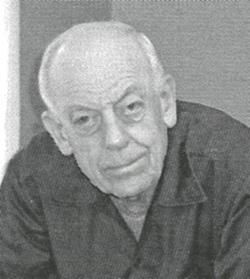 Elwin was born in the family homestead on April 14, 1926, the third of four children, and grew up in Holland MA. After 1954 he spent most of the rest of his life in Westford MA. Recently he has lived in Chelmsford, first at Summer Place and most recently at Meadow Lodge in N Chelmsford.

He served in the Navy during World War II from 1943 to 1946 aboard the U.S.S. PIEDMONT AD 17 in the Atlantic and South Pacific. He was aboard the first Navy ship to be granted liberty ashore in the Bay of Japan prior to the signing of the Japanese Surrender terms. He received the World War II Victory Medal, The Philippine Liberation Ribbon, The Navy Occupation SVC Medal, Asiatic Pacific Campaign Medal, The Tokyo Bay Occupation Force {TF-31) Medal and others.

Elwin retired in 1988 after working for 35 years in the Missile Systems Division of the Raytheon Mfg Co doing both assembly and research and development for radar, missiles, satellites and optics.

At Elwin's request, funeral services will be held privately.