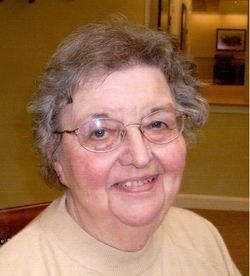 Eva L. Nesmith Brown, age 81, passed peacefully July 8, 2017 at Westford House. She was the widow of Guy N. Brown who passed in 2013.
She was born in Westford December 7, 1935, daughter of the late Julia (Beskalo) and George Linwood Nesmith Sr.
Eva was born and raised in the Graniteville section of Westford, graduated fromWestford Academy in 1953 and was her class salutatorian. She went on to earned her BS in English at the University of New Hampshire and then her MA in Education at Lesley College.
After over 30 years of teaching she retired from Westford Academy where she taught from 1958 to 2000. She traveled the world with her husband never forgetting her students and colleagues and all the wonderful years she spent as a teacher, class advisor and department head at Westford Academy.
She was a member of the Graniteville Methodist Church, a Trustee of WestfordAcademy Scholarship Foundation, was on the Board of Trustees of the Russian Orthodox Cemetery as well as belonging to several professional organizations.
She was mother of the late Guy N. Brown, Jr. who passed in 1999. Eva leaves her cousins Gregory Beskalo of Chester, MA; and Patricia Beskalo Walsh of Pepperell, MA both of whom watched over her in her later years; also many cousins on both sides of her family.
ARRANGEMENTS - Calling hours at J.A. Healy & Sons Funeral Home, 57 North Main St., Westford, MA on Thursday July 13, 2017 from 4:00 until 7:00 PM. Funeral Friday morning with a Funeral Service at St. Mark’s Episcopal Church, 75 Cold Spring Rd., Westford at 10:00 AM. Interment to follow at the Russian Brotherhood Cemetery. IN LIEU OF FLOWERS, donations may be made to the Eva Nesmith Brown Scholarship C/O the Westford Academy Scholarship Foundation, 30 Pattern Road, Westford, MA 01886