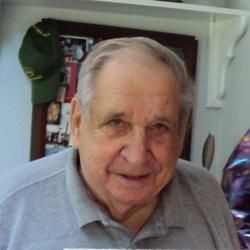 He entered the military as a 2nd Lt. And served on active duty as a nurse anesthetist at Fort Ord, Ca. and the 121st Evacuation Hospital in Ascom, Korea. He remained in the army reserves and served with the 44th General Hospital, Madison, Wi., 331st General Hospital, Lawrence, Ma,. 351st General Hospital, Bedford, Ma. 173rd Medical Group, Chicoppe, Ma. and 804th Hospital Center. Bedford, Ma. He held positions as Chief Nurse Anesthetist, Chief Nurse, and attained the rank of full Colonel. He was awarded nine military medals including the Korean Defense Medal. He was a graduate of Command and General Staff College, Commandants list, and was considered for Brigadeer General of the Army Nurse Corps, Reserve Component

In civilian practice he was Chief Nurse Anesthetist at Stoughton Community Hospital, Stoughton, Wi., St. Francis Hospital, Freeport, IL. and twenty eight years as Chief at the Bedford VA Medical Center, Bedford, Ma. He was founder and president of Office Anesthesia Consultants, Inc, which was the first in the area to provide anesthesia in an office setting for plastic surgeons, opthalmologist, dermatolgist, and dentist in Ma. and NH.

During his tenure at the Veterans administration he introduced anesthesia for electro convulsive therapy, endotracheal anesthesia for diagnostic and dental procedures. He was instrumental in introducing inhalation therapy, regional and spinal anesthesia. He also established a urological clinic for ambulatory patients and conducted the first urodynamic studies. He presented two professional papers dealing with urology at the Northeast Gerentological Association meeting.

At his request, there will be no calling hours. Family and friends are respectfully invited to attend his Funeral Mass on Thursday, June 25 at 10 o'clock at St. Catherine of Alexandria Church, 107 North Main St., Westford. Interment with military honors to follow at St. Catherine Cemetery. In lieu of flowers, memorial contributions may be made to Alzheimer's Association 480 Pleasant Street Watertown, MA 02472.

Arrangements are in the care of the J. A. HEALY SONS FUNERAL HOME, 57 N. Main St., Westford. To share your thoughts and memories of Fred, please click the sign guestbook link.