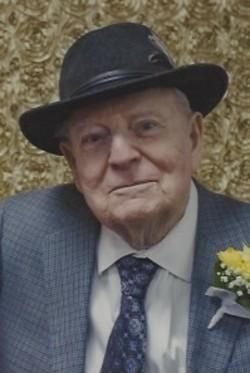 WESTFORD – Lt. Col. Gaylord “Gayl” MacCartney, age 92, passed away peacefully on Sunday, Jan. 15, 2017 at home after a long illness.
He was born in Collingswood, NJ, on May 4, 1924, a son of the late Harold M. and Mary Elizabeth Harbeson (Hincken) MacCartney. When Gayl reached high school age, his parents moved to Haddonfield. He graduated 6th in his class from the Haddonfield Memorial High School in 1943.
Gayl went on to attend the prestigious West Point Military Academy which forever shaped his life in so many positive ways. He graduated from the Academy in June of 1948 and immediately enlisted in the United States Air Force where he served for 27 years. While in the military he was selected and given the opportunity to attend the Massachusetts Institute of Technology to obtain a Master of Science in Aeronautical Engineering which he received in1953. Gayl served several tours of duty within the United States which treated his family to opportunity to live and experience many parts of the United States. He retired from the Air Force in June of 1976 as a Lt. Colonel. Afterwards he went on to dabble in a teaching career at Fitchburg State where he taught Astronomy but found a more rewarding job with Raytheon as a Software Engineer. In order to further his education, Gayl attended the University of Lowell and received a second Master of Science in Computer Engineering in the spring of 1983. This was actually the same year that his son, Bruce, also obtained a degree from the University of Lowell.
When he officially retired in 1990, Gayl continued to be involved in the Town of Westford. He served for many years as an active member on the Westford Town Finance Committee. He enjoyed being a member of the Public Town Garage Building Committee. He was very involved in the Republican Committee on the town and state level.
Gayl enjoyed reconnecting with his fellow cadets at West Point and most recently attended their 65th Reunion. He helped organize and attended many high school unions for Haddonfield Memorial High School that were hosted along the Jersey shore.
Gayl’s faith was strong and he loved studying the Bible. In Westford he shared in the regular fellowship with the Westford Bible Church. He served as the Church Business Manager. One of the added responsibilities he took on was the upkeep for the smooth running of the church building and grounds. He was a great advocate and supporter for the Kids’ League, an afterschool program for children, which has successfully operated for many years in the lower level of the church.
He was an avid Patriots fan and regularly enjoyed watching them play. He loved an adventure and was always game for a sailing cruise with his neighbor Henry Wilson and his sailboat. He enjoyed learning more about astronomy and the universe and cherished the trips with his good friend Fred Radcliffe to attend lectures in Boston.
Gayl’s great love was fixing things, all sorts of things cars, engines, lights, plumbing fixtures, drainage systems etc. He always wanted things to function correctly and preferably in the most efficient way. He was forever finding a way to streamline how something worked. His house was rigged with many handmade inventions. For instance the basement lighting system is operated by a string system that controls most lights from one location with the pulling of the correct string. If things would stop working, no fear, he would study how it was supposed to work and then devise a solution to make it work again.
Gayl was always willing to help and lend a supporting hand in any situation. It was with a smile and a great attitude he would assist anyone. If you were having a problem, he was a great listener and would look at the situation objectively and give you the best possible advice to correct the problem or situation.
He was not boastful of his well-educated mind but used his talents to better the lives of everyone around him. He was very kind to everyone and loved and respected animals. These values emanated from him and were shared with all those he encountered. The life lessons he shared will be forever treasured by all who knew him. He quietly touched and made a difference in so many lives.
We will miss him greatly but know that he has left this world peacefully in his own house surrounded by the people he loved.
Gayl is survived by his wife of 68 years, Betty R. MacCartney of Westford, MA, his two children, Lisa MacCartney-MacDonald and her husband Thomas J. MacDonald and Bruce MacCartney and his wife Sandra MacCartney and two grandchildren Joshua and Katelyn MacCartney; and many nieces and nephews.
Arrangements- Family and friends will gather to honor and remember Gayl on Friday, Jan. 20, from 9 to 11 am at the J. A. HEALY SONS FUNERAL HOME, 57 N. Main Street, WESTFORD. His Funeral Memorial Service will follow at 11:30 am Cornerstone Congregational Church, 32 Graniteville Road,Westford. Cremation and placement at the West Point Mausoleum will occur at a later time. In lieu of flowers, memorial contributions may be made to the Westford Ambulance Fund, PO Box 197, Westford, MA 01886.