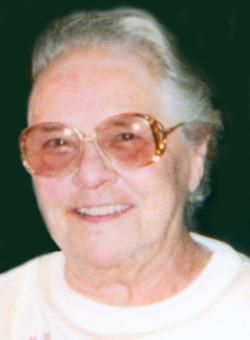 Gerry was born in Boston on June 6, 1921, a daughter of the late William and Nellie Newman. She was raised on the family farm in Tyngsboro and was a graduate of Chelmsford High School, class of 1939.

She resided in the Graniteville section of Westford since 1986 and was a former longtime resident of Somerville. Gerry spent her last six years and received exceptional care from her friends and staff at the Westford House.

Prior to her retirement, she was employed as an assembler with Hayes Research in Somerville for ten years. Gerry was a very outgoing person who was known by almost everyone in town. She enjoyed playing cribbage and had a great love of music.

Relatives and friends may call at the J. A. HEALY SONS FUNERAL HOME, 57 N. Main St., WESTFORD on Thursday, Jan. 16 from 4 until 7pm. Her Funeral will take place on Friday morning with a Prayer Service to be held at the Funeral Home at 10 o'clock. Interment to follow at Pine Ridge Cemetery, Chelmsford. Those who wish may make a memorial contribution in her memory to the Westford House Resident Council, 3 Park Drive, Westford, MA 01886. To share your thoughts and memories of Gerry, please click the sign guestbook link above.