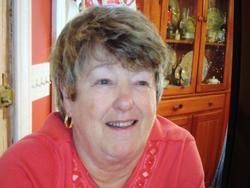 WESTFORD - Janeth Louise "Dee Dee" (Rogers) O'Keefe, passed away on Oct 2, 2013 at Apple Valley Nursing Homeat the age of 79, after a brief battle with cancer.

She lived in Westford her entire life.Born November 8, 1933 to the late Edmund and Marion (Vaselin) Rogers.She graduated from Westford Academy in 1953.

She worked at Sentury Insurance in Concord, MA for many years, but more recently with the Town of Westford until her retirement.She was a communicate of St Marks Episcopal Church of Westford.

She is survived by her son, David O'Keefe and his fianc Lisa Miccile and four grandchildren, Josy, James, Justin and Cailyn O'Keefe;her sister and brother-in-law, Mary and Tom Stofer from Webster, NY;her brothers and sisters-in-law, Harold and Jean Rogers of South Thomaston, ME,George "Yogi" Rogers, Bill and Connie Rogers, all of Westford; also many nieces and nephews, especially Brenda Boudreau of Groton and Sheila Smith of Townsend MA;and a very special friend, Norma Cassidy.

She was predeceased by two brothers, Edmund and Charlie Rogers.
She will be deeply missed by all that knew her.

Services will be private with immediate family.Donations may be given to the Westford Ambulance Fund,PO Box 197, Westford, MA 01886.
Arrangements entrusted to the care of Healy Funeral Home, Westford, MA
www.HealyFuneralHome.com