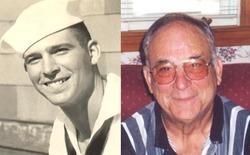 WESTFORD -- John Thomas Antonelli, Jr. age 84, passed away unexpectedly on Monday, December 29, 2014 at his home in Westford. He was the beloved husband of Dorothy (Charette) Antonelli, with whom he celebrated their 63rd anniversary on December 1.

John was born in Chelsea, MA on March 1, 1930, son of the late John T. and Adelina (Cappolati) Antonelli. He was a longtime resident of Westford and a communicant of St. Catherine of Alexandria Parish. He was a Korean War Veteran and served in the US Navy aboard the U.S.S. Hopi. He was honored to be part of the United States Navy.

John worked at General Motors in Framingham for thirty three years and retired in 1982. He was a proud "G.M. Man" and a General Supervisor for the paint department.

Besides spending time with his family, John enjoyed playing cribbage, loved the game of golf, enjoyed fishing, and was a member of the Chelmsford Elks Lodge. "Big John" loved his family and will be remembered fondly by all those who made his acquaintance.

Relatives and friends may call at the J. A. HEALY SONS FUNERAL HOME, 57 N. Main St., WESTFORD, on Friday, Jan. 2, from 4 until 7pm. His Funeral Mass will be celebrated on Saturday morning at 11 o'clock at St. Catherine of Alexandria Church, 107 N. Main St., Westford. Friends are asked to please meet at church. Interment with military honors to follow in Fairview Cemetery. In lieu of flowers, memorial contributions may be made to the Alzheimer's Foundation, 480 Pleasant St., Watertown, MA 02472. To share your thoughts and memories of John, please visit www.healyfuneralhome.com Funeral Director, Scott Laurin 978-692-6502