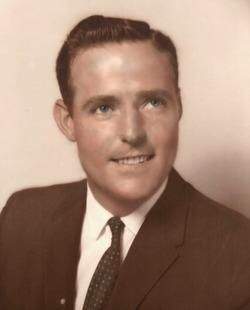 He was the husband of Christine (Dodge) Kavanagh, originally from East Boston, MA. They married on October 10, 1959 in Revere, MA. Together they had five children and resided much of their lives in Westford, MA.

John was born in Westford, MA on June 9, 1929, to the late William J. Kavanagh and Marie W. (Hines) Kavanagh. He graduated from Westford Academy in 1947 and Bentley College. He worked at Gilchrist in Boston and in sales for Sweda International. He served in the U.S. Army from 1951-1953, and was a Korean War Veteran with the 2nd Division Headquarters Company.

In addition to Westford, John and his family were also longtime residents of HamptonBeach, NH where he first spent summers and later lived full-time. Most recently, he and his wife were full-time residents of Sarasota, Florida.

John enjoyed reading, the beach, a good joke,and spending time with his family and friends. He will be greatly missed.

Besides his wife, he is survived by his daughters; Patricia (Kavanagh) Goldsmith and her husband, Gary Goldsmith, of Amagansett, NY and their son, Charles; Janice Kavanagh, of Charlottesville, VA; Christine (Kavanagh) Chase and her husband, Jerry Chase, of Pleasanton, CA and their children, Natalie, Janice, Aurora, Halsey and Austin. He is also survived by his son, David Kavanagh, and David's wife, Jill (Parkhill) Kavanagh, of Charlottesville, VA and their children, Dylan, Michael, Patricia and Andrew. John's eldest son, John James Kavanagh Jr., passed away on August 17, 2012. John is also survived by John Jr.'s children, Kristopher Kavanagh, Jennifer (Kavanagh) Tucker, and their mother, Michele Kavanagh, of Westford, MA and by Jennifer's husband, Tony Tucker.

Additionally, he is survived by his sister, Margaret M. (Kavanagh) Donahue whosehusband, Edward, passed away in 2013, and by his brothers; William J. Kavanagh and William's wife, Joan, of Westford, MA, Brian F.Kavanagh and Brian's wife, Elizabeth, of Hampton, NH, and Bernard B. Kavanagh and Bernard's wife, Antoinette "Toni", of Naples, FLA.

He also leaves behind three great-grandchildren, Gabriella Tucker, Grayson Tucker, and Hadley Chase, as well as many nieces and nephews.

Relatives and friends may call at the J. A. HEALY SONS FUNERAL HOME, 57 N. Main St., WESTFORD, MA on Friday, Jan. 23, from 5 PM until 8 PM. His Funeral Mass will be celebrated at 9AM on Saturday morning at St. Catherine of Alexandria Church, 107 N. Main St., Westford. Friends are asked to please meet at the church. Burial with military honors is planned at St. Catherine's Cemetery. Reception to follow. Share your memories of John by visiting www. healyfuneralhome.com.Funeral Director, Scott Laurin 978-692-6502