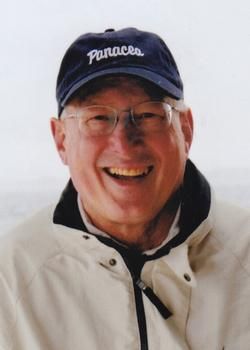 Jack Wrobel passed away suddenly but peacefully in his Westford home on July 7, 2015, days short of his 74th birthday and hours shy from boarding a plane for a family reunion. Family was very important to him, as was his duty to country, church, and community. Jack was a retired Air Force lieutenant colonel who served 21 years. Later he was vice president of program support at Shipley Associates. Recently he became involved with the Pioneer Institute and Lowell UTEC, but Jack's is more widely recognized in his roles as an advisory council member for the Ford Hall Forum, a lector at St. Catherine's Church, a former selectman in the Town of Westford, and a board member of the J. V. Fletcher Library. His family often joked that an entire wing would need to be added to the library to house his personal book collection that would be donated after he died.

Jack was born on July 16, 1941, in St. Louis, Missouri, to Gene and Mary Frances 24 years before the Arch was completed. He graduated from Christian Brothers High School with some dear friends in 1959 and completed a B.S. in physics from St. Louis University and a M.S. in space physics from AFIT. His first major league baseball game was to see the Cardinals, of course. Jack was a card-carrying member of the Ted Drewes fan club, as well as a regular at Imo's pizza, Donut Drive-In, and White Castle. Much to the dismay of his family, he routinely filled the home with progressive jazz music and cigar smoke. They were much more appreciative of his taste in wine. He chose mentoring Boy Scouts over mowing the lawn. Surprising many, Jack picked up golf and sailing in his retirement.

He is survived by his two daughters Julie and Molly, and four grandchildren, Macy, Liza, Evan and Kate. "Grandpa Jack" will forever be synonymous with Kimball's Ice Cream. His family will miss the endless flow of envelopes in the mail containing random articles and cartoon snippets. His daughters are inspired by his work ethic, his ability to truly hear the viewpoints of others, and the fact that he never compromised doing what was right. The greatest tribute his friends and family can offer Jack Wrobel is to cultivate opportunities for people to learn, as well as protect open and free exchange of ideas and information.

In accordance with his wishes, cremation took place July 10. The "Forever Dependable" and "Fantastic!" Jack will be honored with a mass, burial and reception on Sat. July 18, 2015, at St. Catherine of Alexandria Parish, 107 North Main St., Westford, MA 01886; with an hour of visitation in the church from 9:00-10:00am; Funeral Mass at 10:00am, followed by graveside services with military honors at the St. Catherine Cemetery in Westford. IN LIEU OF FLOWERS, Jack asked that donations be made to the Ford Hall Forum in Boston www.FordHall.org.