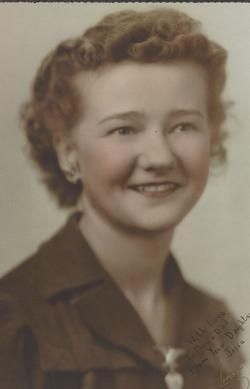 Josephine M. (Sosnowski) Roscoe, age 96, a lifelong resident of Westford, passed away unexpectedly but peacefully at Nashoba Hospital on April 12, 2015. She was the widow of Charles Roscoe who passed in 1983.

She was born in Westford on February 24, 1919, daughter of the late Joseph & Anna (Takucz) Sosnowski.

Prior to her retirement, she worked at Murray Printing in Westford for many years. In her earlier years she worked in a local yarn-shop. She enjoyed knitting, crocheting, gardening and cooking. She was also a member of the VFW Mattawanakee Post No. 6539 Ladies' Auxiliary.

A long-time parishioner of St. Catherine of Alexandria Parish, Josephine was a woman of great faith, she attended mass weekly and attended rosary prays as often as she could with her friends until it was no longer possible. She was generous, caring, loving and forgiving, and never spoke ill of anyone. She was a great mother, grandmother and great grandmother, she was always loving and caring.

She is survived a son and daughter-in-law, Joseph and Marianne Roscoe; a daughter, Marilyn Roscoe; five grandsons, Nicholas and Nathan Roscoe, Liam Moran, Jacob and Jonathan Selman, and great-granddaughters Abigail and Alice Roscoe. She was the mother of the late Mary Roscoe-Selman who passed in 2009, and sister of the late Anna Suzedelys.

ARRANGEMENTS: According to her wishes, there will be no visitation. Relatives & Friends are invited to her Funeral Saturday morning, April 18, 2015, with a Funeral Mass at 9:00 AM at St. Catherine of Alexandria Parish, 107 North Main St., Westford. Interment to follow at St. Catherine Cemetery in Westford. IN LIEU OF FLOWERS, donations in her memory may be made to the Westford Ambulance Fund, P.O. Box 197, Westford, MA 01886.