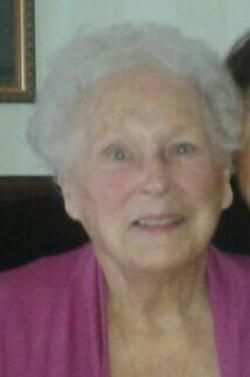 WESTFORD -- Marjorie D. (Davis) Shea, age 82, passed away on Saturday, July 5, 2014 at Lowell General Hospital. For nearly sixty years, she was the wife of the late Lawrence Shea who passed away on June 3, 2011.

She was born in Lowell on July 30, 1931, a daughter of the late Clayton and Clara (Swallow) Davis. She graduated from Groton High School Class of 1949.

Earlier in her life, Marjorie was employed in the private nursing field as a LPN prior to starting her family. She later worked at Westford Nursing Home for many years.

She was a member of the Dunstable Evangelical Congregational Church having served on various boards and committees. She coordinated the fellowship hour for many years and was known as 'Grammie Shea' to all.
Marjorie was a sixty-eight year member of Dunstable Grange and of Minuteman Pomona having served in many capacities including Master and Lecturer. She was a member of the Mass State Grange and the National Grange. She and Lawrence received the ROSE Award in 2005. She also served on the State Grange Agriculture Committee 2000-2009 then as a member Emeritus of the Agricultural Commission from 2009 until her death. She was passionate about fundraising for Heifer Project International (HPI) heading up the State Grange annual raffle.

She was dedicated to her family and enjoyed hosting family gatherings especially during Christmas and Labor Day. In her leisure time, Marjorie enjoyed gardening and volunteering for the Grange and church groups, helping the youth and less fortunate wherever possible. She never met a stranger. She was a very warm, outgoing, loving person. Her home and table were open to all.

She leaves four sons, Stephen Shea and his wife Sherry of McKinney, TX; Raymond Shea and his wife Maryanne of Douglas, MA; Sheldon Shea and his wife Claire of Fitchburg and Quintin Shea and his friend Wendy Hall of Westford; a daughter Nadine Watton and her husband Fred of Oxford, CT; also, eleven grandchildren and five great-grandchildren; a sister, Ann Butterfield of Billerica, MA; also many nieces and nephews. She was predeceased by two brothers, Archer Davis and Clifton Davis and four sisters, Barbara Bacon, Sally Seward, Mary Pelletier and Martha Gross.

SHEA - A memorial service will be held on Saturday, August 23, 2014 at 11am, at the Union Swallow School, Dunstable Center. Those who wish may make donations in Marjorie's memory to The Dunstable Evangelical Congregational Church for Youth Missions, 518 Main St., Dunstable, MA 01827or to The Massachusetts State Grange (please note for HPI), c/o Deb Goodrich, 2 Duffy Rd., Boylston, MA 01505. Arrangements are in the care of the J. A. HEALY SONS FUNERAL HOME, 57 N. Main St., WESTFORD 978-692-6502 www.healyfuneralhome.com - Funeral Director, Scott Laurin