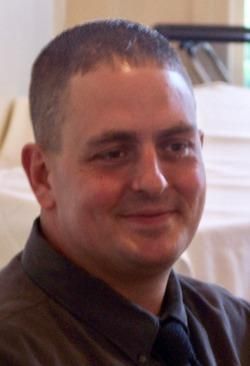 He was born in Nashua, NH on January 13, 1979,the beloved son of Betty Verrecchia of Ashburnham and the late Jon "Jude"Wallace. Marshall resided in New Ipswich, NH since 2005andwas formerly of Westford. He was a graduate ofNashobaValley Technical High School, class of 1997.

His vocation at NVTHS was machine shop, but he worked in many trades. Marshallbecame a concrete finisher seven years ago. For the past two years he worked for Ruby atDependable Concrete Floorsin New Ipswich NH.

Marshall enjoyednothing more than spending time with his family and friends,when he arrived that is when the fun began.Marshall loved his home on Pratt Pond in New Ipswich and enjoyed having a crowdover for hiking and swimming, andyou could always be assured an excellent home cooked meal.

Marshall loved life and had many interests including fishing, hunting and motorcycles.He sharedhis passion for fishing with his cousins, niece Elsaand nephew Jake.He was a bow hunting enthusiast andenjoyed hunting inMiddlesex,New York at theJudd'shomewith his close friend Jason Nickson. Marshall took a 9 pointBuck lastfalland he could not have been more proud. Marshall built a motorcycle andwent on manyexcursions with his good friend Jason "Guy" Merchant.

He enjoyed spending time at the family camps in Cushing and Smithfield Maine, fishing, flying a kite or just hanging out with his cousins.

Marshallhad a close relationship with his sister Amanda, her family and his MomBetty;they looked out for each other and were part of each other’s every day life.

Threeyears ago Marshall adopted a pit bull "Boston" ormore likethey adopted each other.Everyone who metBoston commented that his gentle nature wasjust like Marshall's.

We wish it was possible to include all of the people that were lucky to call Marshallafriend but there arejusttoo many, please know he loved you all.Besides his mother, he is survived by his sister, Amanda Guerra, herhusband, Eugenio "Red"his nephew Jacob andnieceElsa of Gardner.

Marshall loved and was loved by his manycousins;he considered Mike and Andy Verrecchiato beamong his closest friends.

He is also survived by his girlfriend AprilWibbenof Keene, NH and his close friend MirandaHabalouofWinchedon.

ARRANGEMENTS - Relatives and friends may call at the J. A. HEALY SONS FUNERAL HOME, 57 N. Main St., WESTFORD on Monday, Oct. 10 from 3 to 8pm. A Celebration of Life will take place on Tuesday morning at 11 o'clock at the Franco American Club, 55 W. Prescott St., Westford. IN LIEU OF FLOWERS, memorial contributions may be made to MSPCA atNevins Farmall donations will go to the Pitbull programPit Pals. To share your thoughts and memories of Marshall, pleaseclick the sign guestbook link.