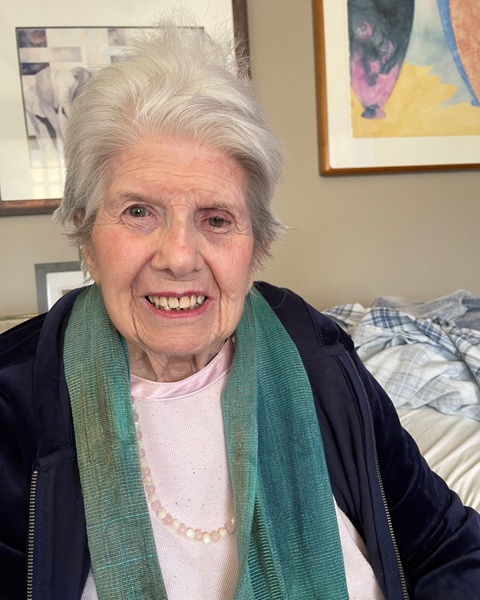 Martha (Beck) Parker, 96, of Westford, MA passed away peacefully, September 25, 2022 at her daughter’s home surrounded by the love of her family. Born July 11, 1926 to Pelagia (Szwed) and Nicholas Beck. Raised in Springfield, MA she went on to graduate from Mass Amherst and on to get her Masters Degree at Fitchburg State University.

Martha began her career as an elementary school teacher and ended her career as a psychological therapist. Her entire life was serving and helping all beings and the planet in many ways.

Martha had a strong desire to advocate for all right, whether it be social justice, environmental causes, political, human rights, animal rights, etc…She loved exploring nature, she especially loved trees and being one with the outdoors often finding tranquility wherever she ventured off to.

Martha was an activist all her life. For many years she was a part of the Concord Peace Vigil, a group who met every Friday morning, for over 20 years, in Concord, MA center, to walk in silence “for all who suffer because of war.” This was her regular practice. She also marched in Boston, New York City and Washington D.C. against injustice, war, environmental causes, gun reform, human rights and more.

She enjoyed art, literature/reading, dance, poetry, music and T’ai Chi. Her greatest joy however was spending time with her family and traveling the world.

Martha had an active spiritual life. She was raised in the Russian Orthodox tradition in childhood. She explored many of the world’s religions and ended up in the Unitarian Universalist tradition, where she raised her children, accepting all spiritual paths.

She is the sister of the late Helen Beck Morrill and Gregory Harry Beck.

All services will be held privately per Martha’s wishes. In lieu of flowers, donations may be made in Martha’s memory to one of her favorite organizations: The World Wildlife Fund, the ASPCA, the Humane Society or the NRDC (National Resources Defense Council.)