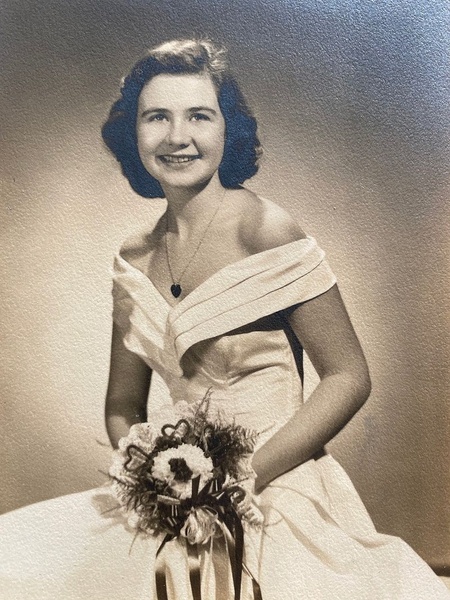 Born in Providence on April 7, 1933 to Frank Earl VanOlinda and Eﬃe Matheson VanOlinda, Mary Elizabeth VanOlinda or "Liz" as her friends called her was a doting mother and grandmother, dedicated friend, racoon tamer, oil painter, reader, whip-smart skier, graduate of Plymouth State University and a classical music habitué. Liz had too many hobbies to contain in a single lifetime and whether she was knitting your a sweater that you'd get in two years (maybe) or exploring her deep interest in family history and genealogy, she tackled all things with genuine curiosity, attention to detail, and absolutely no grasp of the concept of time.

Liz was an expert ﬂea market ﬁnder of gold frames without the glass on them, collector of antiques, and baker of birthday cakes for every family member and acquaintance in a 50 mile radius. She was a storyteller by nature (sometimes it was the same story over again) but she was always eager to hear your story or tell her own and it was in this way that she made friends of strangers everywhere she went.

Liz is survived in life by her son John Herman; grandaughters Sarah Herman, Caitlin Burns, and Meegan Burns; and her sister in law Ellie Herman. She was preceded in death by her daughter, Heather E. Burns, brother David VanOlinda, and sister Carol V McGee.

Whenever she wanted to make her granddaughters roll their eyes she'd express her affection for Sean Connery and exclaim "he can park his slippers under my bed any day" so in lieu of ﬂowers we ask that in her memory you watch a Sean Connery ﬁlm with a glass of wine while wearing your most comfortable house shoes.