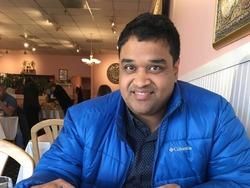 Pradipta Seal, a loving husband, father, son, brother, uncle, friend and colleague passed away unexpectedly on Friday, Aug 12th 2016. He was 41 years young, living life with the flair of an independent mind embodied by his passion for entrepreneurship, enthusiasm for sports, love for dishes and aspirations for lofty dreams. One of those rare human beings who was undeterred by any setback, yet empowered with humor, smile and surprise.
Born in Burdwan, West Bengal (India), he was the youngest son of Prof. Bijoy Seal and Reba Seal. As he grew up in the campus of Burdwan University, he shared a special bonding with his elder brother indulging in culinary pleasures. Having completed M. Phil at University of Hyderabad, he pursued graduate studies at Boston University with particular focus on Mathematics and Statistics. Consumed by his professional pursuit, he immersed himself in computational statistics serving the Insurance and Health Policy industries.
It was his love for Mathematics and Statistics that drew him towards Gayatri, a fellow student of statistics at University of Hyderabad. The probability of falling in love was high! While Pradipta migrated to Boston after Hyderabad, Gayatri went to Charlotte. But their longing for each other made Gayatri move to Boston leading to their wedlock in 2002. His life took on a different meaning in 2011 when he became a proud father of a beautiful little girl, Nilanjana (Mahek). Yet he continued to balance his time between work, family, travel and sports, with family taking immense priority over anything else. Pradipta lived life king-size with Gaytri as his Queen and lived in the moment, springing up delights for his family with unrevealed vacations and surprise events
Riding on desires to build his own venture, he launched Vatiq Inc., a predictive model based automated trading tool. His motivation to start Vatiq resulted from seeing a close friend burn in the 2008 financial meltdown and wanting to help people weather such deep economic crisis. His ideas emanated from simple feelings but had far reaching potential to impact human well being!
Pradipta's infectious, innocent personality attracted a multitude of friends - everyone of them are mourning his loss. Being the life and soul of any party, he was encircled by friends at all time. As an avid sportsman, he won many awards and admirers in ping-pong and tennis.
Having left us too early, Pradipta is survived by Gayatri (wife), Nilanjana (daughter), parents, elder brother, sister-in-law, niece and in-laws. He will be always loved and dearly missed by his loved ones.
ARRANGEMENTS: His Visitation and Funeral will take place at the J.A. HEALY SONS FUNERAL HOME, 57 North Main St., Westford, MA 01886 on TUESDAY August 16, 2016 from 9am-11am. WithFuneral Procession beginning at 11am to the Merrimack Crematory, 10 Henry Clay Dr., Merrimack, NH 03054. IN LIEU OF FLOWERS, Donations in his memory may be made to The American Heart Association at www.Heart.org