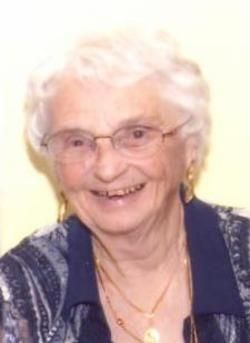 WESTFORD - Rena F. (Cote) MacMillan, 91, passed away peacefully after a brief illness on Thursday, October 1, 2015 surrounded by her loving family. She was the wife of the late William "Bill" C. MacMillan with whom she shared 57 truly special years after their marriage on February 13, 1943. She was born in Three Rivers Quebec, Canada on June 3, 1924 the daughter of the late Raoul J. and Bernadette (Lamy) Cote. She move to Westford as an infant and became a life long resident. Educated in the Westford School system, she was also a lifelong parishioner of St Catherine of Alexandria Parish of Westford.

In her early years, Rena worked in the bobbing department for the Abbott Worsted company and after her marriage to Bill, she became a stay at home mother and house wife. In her later years she worked as a substitute cafeteria worker at the Robinson School. As a child, Rena overcame life threatening injuries suffered in a tragic house fire. That fire claimed the lives of a younger brother and sister along with a young girl cousin who was visiting. She never let her injuries prevent her from doing anything or using them as an excuse.

Her real passion was being surrounded with her family and her many friends. She loved to travel, bake and sew. She made countless cakes, pies, afghans, knitted items and her specialty whoopie pies which she contributed to the various civic organizations that she and Bill supported over the many years. She especially liked bringing goodies to the Westford Cameron Senior Center bingo nights.

She was also predeceased by an infant son William Jr., a brother Aldege Cote, a sister Noela Cote, and her sister Lillian Dubey/Feeney.

Rena's family would like to extend a special thank you to the staff at Life Care Center of Nashoba Valley, Littleton, MA for their care and compassion provided to Rena and her family.

Relatives and friends may call at the J. A. HEALY SONS FUNERAL HOME, 57 N. Main St., WESTFORD, on Tuesday morning, Oct. 6 from 9 until 10:30am. Rena's Funeral Mass will follow at 11 o'clock at St. Catherine of Alexandria Church, 107 N. Main St., Westford. Interment at Fairview Cemetery, Westford. Those who wish may make contributions in her memory to the Friends of Cameron Senior Center, P.O. Box 2223, Westford, MA 01886. Family and friends may share memories of Rena by clicking the sign guestbook link.