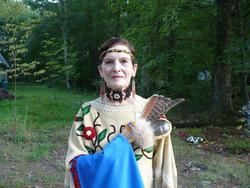 WESTFORD: Rita M.A. (Guillemette)(Casparro) Shipley, age 72, a long time resident of Westford, died on Saturday June 7, 2014, at her home. For 37 years she was the beloved wife of Brian W. Shipley.

She was born in Lowell on Feb 24, 1942, daughter of the late Maxime & Yvette (Robarge) Guillemette. She was a graduate of Daniel Webster College with a degree in Business Administration.

She was most recently employed by the Town of Westford as a senior clerk in the Town Clerk's Office. She previously worked as a teacher's aide at the Cameron and Frost Elementary Schools in Westford. Prior to that she was a purchasing agent at Ft. Devens for the 10 Special Forces Group, and later a purchasing agent for various electronics companies in the area.

In her earlier years she helped create the town's first food bank, and was also involved with establishing the Roudenbush Community Center. She was a proud member of the Sovereign Abenaki Tribal Nation and was fondly known as "Morningstar", and was very active with Native American arts & crafts with local schools.

Rita was a Justice of the Peace, and was the first elected mayor of the Buena Vista Housing Area at Ft. Devens.

Besides her husband, she is survived by four sons, Anthony Casparro of Nashua, James Casparro and his wife Melissa of Hillsborough, NH, Paul Casparro of Nashua, and Shane Shipley of Ohio; a daughter and son-in-law, Elizabeth & Korey Boudreau of Lunenburg; a brother and sister-in-law, Donald & Susan Guillemette of Westford; her uncle, Edward "Onkwe Tase" Guillemette; also many grandchildren and many great-grandchildren.

ARRANGEMENTS: Relatives & friends will be received on Thurs. June 12 at the J.A. HEALY SONS FUNERAL HOME, 57 NORTH MAIN STREET, Westford, MA from 4:00-8:00 PM. Funeral Friday morning with a funeral mass at 10 o'clock a.m. at St. Catherine of Alexandria Parish, 107 North Main St., Westford. Interment to follow at Pine Grove Cemetery in Westford. IN LIEU OF FLOWERS< donations in her memory may be made to the American Indian Scholarship Fund, 8333 Greenwood Blvd., Denver, CO 80221 or www.CollegeFund.org