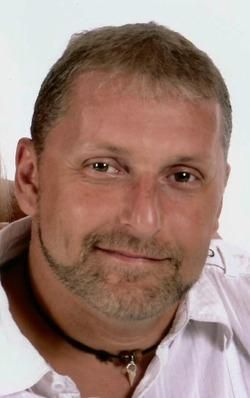 HUDSON, NH - Robert T. "Bo" Harron, Jr., age 45, passed away on Thursday, Dec. 29, 2016 at Mass General Hospital after a long illness. he was the beloved husband of Pamela J. (Mack) Harron.
He was born in Lowell on January 26, 1971, son of Robert Harron, Sr. of Pepperell and Mary Harron of Nashua. Bo was a resident of Hudson, NH for twenty four years and was formerly of Westford wherehe graduated from Westford Academy.
He was employed as a computer engineer at Global American, Inc. in Hudson, NH for 11 years. Bo was a big fan of the Boston Bruins and loved collecting Star Wars memorabilia.
Besides his wife, Pamela and his parents Robert and Mary, he is survived by his two children, Josh and Taylor Harron, both of Hudson, NH; a sister, Pamela Hart of Nashua, NH; a brother, Brian Harron of Manchester, NH; his mother-in-law, Katherine Mack of Westford; brothers-in-law and sisters-in-law, Deborah Clark, Scott Mack and his wife Lorri, Stephen Mack and his wife Sandra, Carolyn Caisse and her husband Victor, John Mack and his wife Nancy and Jason Mack and his wife Nicole; also many aunts, uncles, cousins, nieces and nephews. He was the son-in-law of the late John Mack.
ARRANGEMENTS- Family and friends will gather to honor and remember Bo on Wednesday, January 4 from 4 to 8pm at the J. A. HEALY SONS FUNERAL HOME, 57 N. Main St., WESTFORD. His Funeral Mass will be celebrated on Thursday morning at 10 o'clock at St. Catherine of Alexandria Church, 107 N. Main St., Westford. Interment inHoly CrossCemetery, Hudson, NH. To share your thoughts and memories of Bo, please click the sign guestbook link.