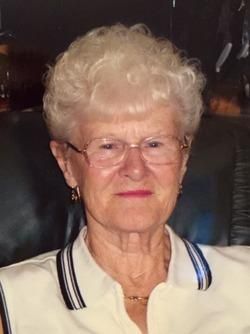 Shirley (Reid) Greenslade, age 87, passed away on Friday, May 27, 2016 at after a long illness with her son, Ken and her daughter, Nancy by her side. She was the wife of the late Arthur “Ted” Greenslade, Jr whom she married April of 1950.

She was born in Detroit, Michigan on December 18, 1928, a daughter of the late Kenneth and Viola (Crafts) Reid. She moved to South Chelmsford as a small child and was educated through the Chelmsford school system, graduating from Chelmsford High School, class of 1946.

Shirley was very active in the Westford community. She helped create the PTA in Westford and served as its second President. She volunteered as a den mother for her sons Scout troop and was active in Saint Andrews and Saint Marks choir. She also served two terms on Georgetown housing authority. Shirley spent twenty years working in the North Middle School / Norman E. Day Cafeteria and was fondly referred to as “The Lunch Lady”.

She is survived by her three children, Kenneth Greenslade and his wife, Robin of Mims, Florida, Nancy Cook and her husband, Chester of Westford and Beverly Tufts of Derry, NH; a brother, Frederick Reid of Chelmsford; also eleven grandchildren, twenty four great grandchildren and nieces and nephews.

She was the mother of the late Arthur “Teddy” Greenslade, III who passed away October 15, 1982 and sister of the late Kenneth Reid, Jr., William Reid and Jeanne Morin.

ARRANGEMENTS – Relatives and friends are respectfully invited to attend her Memorial Visitation at the J. A. HEALY SONS FUNERAL HOME, 57 N. Main St., WESTFORD, on Thursday, June 23 from 4 until 7pm. A prayer service will take place on Friday morning at the Funeral Home at 10 o’clock followed by interment at Fairview Cemetery, Westford. In lieu of flowers, memorial contributions may be made to the Friends of Cameron Senior Center, PO Box 2223, Westford, MA 01886. To share your thoughts and memories of Shirley, please click the sign guestbook link.