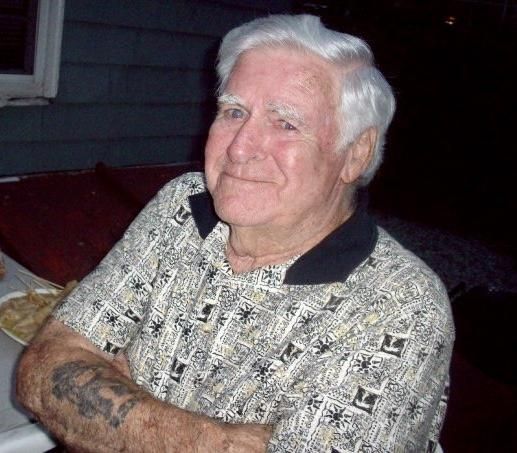 WESTFORD - Thomas E. Holmes, age 93, passed away on Tuesday, December 24, 2019 at Westford House with family by his side. For 66 years he was the loving husband of the late Jeannine J. (Heroux) Holmes who passed away in 2016.

Tom was born in Westford on Feb. 23, 1926, a son of the late James and Annie (Walsh) Holmes. He was a lifelong resident of Forge Village and a communicant of St. Catherine Parish. He served in the U.S. Navy during WWII stationed on the USS Farquhar, a destroyer escort that in 1944 participated in the rescue of 186 survivors from the torpedoed US ship, Fiske. He was a member of the VFW in Westford.

Prior to his retirement, he held management positions at Nashua Corp. in Chelmsford and Anton's Dry Cleaning. Earlier in his life, Tom was a part time police officer and volunteer fire fighter for the Town of Westford. He was an avid sports fan who played hockey in his younger years and golf into his 80's. Tom enjoyed traveling in his motor home with his wife Jeannine and spending winters in Ft. Meyers Beach, Florida.

He is survived by his children, Gary Holmes of Bradenton, FL, Brian Holmes and his wife, Doris of Chelmsford, Barbara Holmes of Exeter, NH and Colleen Clark and her husband, Tim of Westford; a brother, Kevin Holmes and his wife, Eileen of San Diego, CA; seven grandchildren, Bria, Drew and Lacey Ansara, Lee Ann Clark Moore, Patrick Clark, Melissa Magnan and Tiffany Holmes; also five great grandchildren and many nieces and nephews. He was the brother of the late James Holmes, Agnes Hansen and Betty Stander.

Services will be held privately.