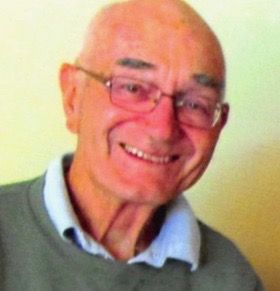 Timothy (Tim) Joseph Donovan, 80, a long-time resident of Westford, MA, and before that, Arlington, Woburn and Burlington, MA, died peacefully in his sleep at Northwood Nursing Home in Lowell, on April 21, from complications related to the Corona Virus.

Tim was predeceased by his father and mother, Joseph and Kathleen (McKenna) Donovan of Arlington, MA, his sister, Mary Harrold of Hudson, MA, his brothers-in-law, Robert Searls of VA and Robert Williams of MI.

He is survived by his loving wife of 54 years, Gwenyth (Gwen) Ellen Donovan of Westford, MA; his daughter, Beth Donovan of Lowell, MA; his son and daughter-in-law, Brian and Jocelyn Donovan, his grandchildren, Laura, Sarah, and Julia Donovan, all of Sterling VA; a sister, Ellen Searls of VT; a brother and his wife, Michael and Kathleen Donovan of E. Falmouth, MA; brothers and-sisters-in-law, John Harrold of Hudson, MA, Kathryn and Jerry Kaspzyk, Marianne Keach, Nancy and Pat Nardizzi, Phyllis and James Paske and Sandy Williams, all of MI; many nieces, nephews, grandnieces and grandnephews from MA and MI.

Tim was a graduate of Arlington High School and Tufts University. After graduating from Tufts, Tim joined the US Marine Corps' Office Training Program and became an Artillery Officer, stationed out in the desert at Twentynine Palms, California. It was while there that he met his future wife Gwen who was teaching in San Diego, California.

After leaving the Marines in December of 1964, Tim and Gwen married on June 25, 1965, in Detroit, MI and then moved to Woburn, MA for three years, Burlington, MA for nine years and then to Westford, MA for the next 43 years. Tim worked in the high-tech industry as a sales rep for many of the major tech companies, including IBM, SBC, Decision Data, NEC, Bull Peripherals and Kentek. After he retired, he drove the Senior Bus once a week for many years, spent time with his vegetable garden, making furniture and playing golf. He had four holes in one, the last one in MI on his 70th birthday.

Tim will be remembered as an affable man, hardworking, easy going and generous. He was beloved by his family and friends and will be missed by many.

Due to the current COVID-19 restrictions, a Memorial Service will be held at future date to be announced.

A Memorial Service will be held at a later date